The Trust and Reputation Network Initiative 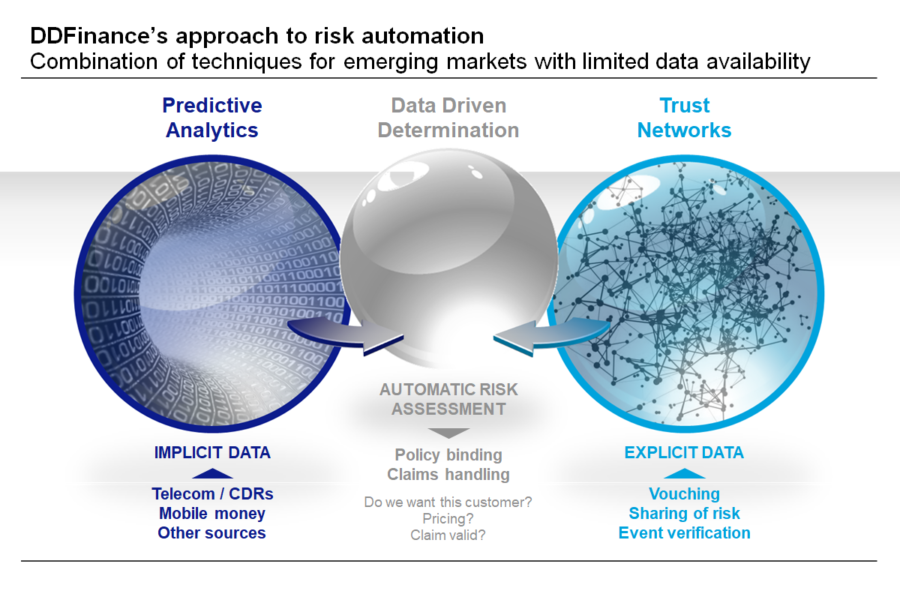 When John Donne, the English poet and cleric, proclaimed that ‘no man is an island’, he also reflected the Ubuntu principle of ‘I am what I am because of who we all are’. The collective and contingent nature of life in 16th century England is analogous to the present day experience of the financially/socially marginalized majority populations in emerging economies, such as those of Sub Saharan Africa (SSA).

In developed world societies these collectives have come to be represented by larger political realities and financial structures that effectively negate the prior requirement for local, personal support networks. While no man is an island, the primacy of the individual has become an accepted premise. This is reflected in the individualized nature of developed world financial services and products, a trend that is both accelerating and provoking alternatives

In emerging economies there has been a well-documented ‘financial revolution’ whereby previously unavailable services such as electronic funds transfer, savings and credit have been realized through digitization, and made available through mobile telephony technologies. This ‘new market’ represents an opportunity to engage both the developed and emerging economies in ways that provide benefit to both: financial inclusion for the excluded through market penetration of established developed world financial service providers. SSA is perhaps both the greatest challenge and greatest opportunity for the developed world financial services sector.

However, repeated attempts to bind these markets have failed, particularly in the provision of products as insurance. These failures represent the doomed attempt to apply the developed world individualized concept on the marginalized portions of emerging societies that largely operate at the level of the collective.

While SSA has widely adopted and ever increasing participation in mobile money services, most participants have never written a cheque, never owned a credit card – and likely never will. The financial behaviour evident in the individual digital exhaust of developed world markets does not exist – and may never exist. Therefore, the processes and approaches employed within the developed world financial sector cannot work – and may never work.

These emerging economies represent a fundamentally different market: one of low value but very high volume of transactions that require highly scalable and low-to-zero variable processing costs. But at least as important is an understanding of how these societies operate and work within the current modes and traditions of exchange.

Repeated attempts to leverage techniques such as predictive analytics to achieve automation and scalability have failed. And they will continue to fail because they address a market that does not exist in SSA – the developed world, information rich marketplace with deep, wide, high quality individualized data.

Further, these services view the marketplace as a collection of individuals, rather than as collectives consisting of individuals, who are bound by informal networks of trust and reputation.

The creation of financial services and products that acknowledge and address the individual in the context of the collective(s) to which they belong; provokes the trust and reputation behaviour inherent in those collectives through product and service interactions; represents these expressions and networks as a form of social capital that individuals and collectives can leverage.

This social capital may then both support and align products and services to existing cultural and economic norms, and allow the creation of (semi) automated processing that would allow the necessary transaction cost/scalability to address the massive underserviced markets.

This hypothesis forms the basis of the Trust and Reputation (T/R) network initiative currently undertaken by DataDrivenFinance AS (DDFinance).

The application of graph theory, network science and the principles of systems theory will transform the explicit expressions of trust and reputation captured by the services and products into social capital metrics.

Initially, T/R will be validated within the context of well-established groups and collectives which have previously demonstrated related behaviour such as informal savings. As behavioural predictions and assumptions are verified and underlying models validated, the resulting social capital metrics will be used to drive automated determinations associated with activity such as claims processing, policy binding and credit worthiness at the individual and group level.

Over time and with the application of systems theory principles, new and previously unidentified information can be used to evaluate social capital across demographic, geographic and other social dimensions.

Central to the success of this approach is the ability to position the T/R implementations as a process that supports the groups and not as an external actor.  In this way, the formal (digital) social capital would be viewed as being as valuable as the informal social capital that currently operates within current informal networks.

Finally, with sufficient validation, the social capital principles will be extended to self-identifying groups with some level of confidence in the ability to measure social capital and hence maintain the required operational efficiencies achieved through automated determinations activity.

We use cookies on our website to give you the most relevant experience by remembering your preferences and repeat visits. By clicking “Accept”, you consent to the use of ALL the cookies. However you may visit Cookie Settings to provide a controlled consent. Read More Here
Cookie settingsACCEPT
Manage consent

This website uses cookies to improve your experience while you navigate through the website. Out of these, the cookies that are categorized as necessary are stored on your browser as they are essential for the working of basic functionalities of the website. We also use third-party cookies that help us analyze and understand how you use this website. These cookies will be stored in your browser only with your consent. You also have the option to opt-out of these cookies. But opting out of some of these cookies may affect your browsing experience.
Necessary Always Enabled
Necessary cookies are absolutely essential for the website to function properly. These cookies ensure basic functionalities and security features of the website, anonymously.
Functional
Functional cookies help to perform certain functionalities like sharing the content of the website on social media platforms, collect feedbacks, and other third-party features.
Performance
Performance cookies are used to understand and analyze the key performance indexes of the website which helps in delivering a better user experience for the visitors.
Analytics
Analytical cookies are used to understand how visitors interact with the website. These cookies help provide information on metrics the number of visitors, bounce rate, traffic source, etc.
Advertisement
Advertisement cookies are used to provide visitors with relevant ads and marketing campaigns. These cookies track visitors across websites and collect information to provide customized ads.
Others
Other uncategorized cookies are those that are being analyzed and have not been classified into a category as yet.
SAVE & ACCEPT